Can Detroit Save America? 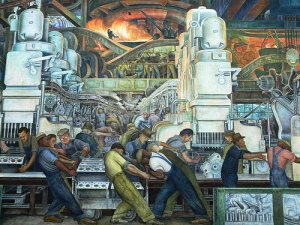 Everyone will have a different opinion, but in my opinion, the Chrysler Super Bowl advertisement highlighting Detroit and Eminem is the greatest commercial of all time.  I have spent many years working to make a small, urban industrial area more economically viable.  Many cities have symbolized America’s industrial decline over the years…Cleveland and its Cuyahoga river fire, Newark and its recurring rise to the top of the crime charts, Pittsburgh and Erie and my own Bethlehem with their steel-centric declines.  Perhaps none have come to symbolize the economic trouble with America more than Detroit in recent decades.

Although I’ve escaped to the suburbs myself, I still work to revitalize a region in the rust belt by managing a high-tech incubator in a former Bethlehem Steel building.  So, when I see a brilliant video like the Chrysler ad, figuratively flipping the bird at those who’ve left it for dead, I get goosebumps and want to leap from my chair to shout “Hell yeah!” along with them.  And you should too, because that which pulled down Detroit is what has pulled down America’s economy.  Fortunately, maybe, Detroit may have some fight left.

The Detroit News ran this story the other day about how the City fares in technology compared to other midwest cities.  Now I don’t want to put too much stock in a story touting Detroit’s comeback in the tech sector when the study was created by a large technology trade association in Michigan.  But I do like the attitude and it’s the second time Detroit caught my attention this year (see my earlier post on how the private sector can save Detroit).

Pandora had a fair day yesterday on their first trading day.  Up a bit from their $17 IPO price, on a day when the DJIA was down 1.5%.    LinkedIn, Zynga, Facebook all make up the new pantheon of technology moguls.  Clearly at somewhere north of $2.5 billion in market cap, the Pandora leaders have built something that people value. But I continue to look at these companies and wonder if there is sufficient intrinsic value in companies like these, that generally make money by advertising, to sustain our nations economy.  Or, was the intrinsic value in companies like those built in Detroit in bygone days, more useful in building GDP and wide-scale nation-building jobs?

It’s a long, complicated and esoteric conversation to engage in, but I would argue that Detroit-type businesses grew while our economy grew to become the world’s largest and without peer.  It should not be surprising that the businesses involved in electronics, automotive industries, industrial automation and machine technologies are currently building the formerly poverty-laden economies of southeast Asia.  There are countless other ripples that roll across the globe to shift economic power.  But I’d be interested to look more deeply into the nature of the ripple effects generated from a Detroit-style economy compared to San Jose-style economy.

Companies like LinkedIn, Google, Microsoft and others are able to leverage the easy, and almost-free, flow of information across the world.  Businesses that support these industries don’t need to be located next door or down the street or at the other end of a rail siding.  Detroit-style economies, by contrast, were vertically integrated and suppliers benefitted from clustering around the big buyer of, well, stuff.

Much of this shift has been stoked by the venture capital industry.  I like venture capital.  Private sector money flows to the opportunities.  I get that.  But it has evolved a very short term view of success.  Five years and we want to be public.  Maybe a strategic acquisition in 6 years.  Others use 3-month time horizons to measure progress.  This is the preogative of the private sector.  And it has built a shallow economic base upon which it becomes more and more difficult to plant a seed bed for long term growth.  I’d like to hereby declare this era the “dust bowl” economy.

So, maybe the private sector alone can’t save Detroit.  Maybe, if the private sector gets some help from the public sector, and we invest vigorously in Detroit-style businesses, we might just yet re-rev the economy of the country.